A successful economy requires outsize rewards for the able (and lucky) few who overcome very long odds to produce valuable innovations that others are willing to pay for.

In the wake of the 2008 financial panic, a narrative has developed around the American economy. Call it the Occupy Wall Street view of history. According to this view, America is dominated by a greedy kleptocracy—the 1%—that exploits everyone else, reaps most of the spoils for itself and manages to avoid paying its fair share of taxes on its ill-gotten gains.

Edward Conard, a one-time partner of Mitt Romney’s at Bain Capital, is having none of it. “Unintended Consequences” is a full-throated defense of economic dynamism, entrepreneurial risk-taking and the rewards of success—with due recognition of the long odds that face any business or investor. Mr. Conard embraces economic Darwinism as not just the best but the only route to prosperity and economic growth—to more jobs and higher standards of living. “Survival of the fittest,” he writes, “pits new ideas against existing alternatives . . . [and] ruthlessly prunes away less capable alternatives, ensuring that only the most valuable and robust remain.

“Mr. Conard subtitles his book “Why Everything You’ve Been Told About the Economy Is Wrong,” and much of it is indeed dedicated to knocking down bogus clichés. Contrary to what the doomsayers contend, the trade deficit is good for growth, he argues: Borrowing from China to buy cheaply made Chinese goods frees up money to be invested more profitably at home; in the meantime, China buys our debt and keeps interest rates low. Our return on investments in innovation is greater than the cost of borrowing from abroad, so America comes out ahead.

Punishing banks for the financial crisis, he argues, is counterproductive. Instead, we should find ways to charge banks for the guarantees against failure that they receive from the federal government and then encourage them to put idle capital to work by investing in the next generation of American businesses.

In a similar spirit of contrarianism, Mr. Conard says that income redistribution through high marginal tax rates hurts the middle class and the poor more than it hurts the rich who pay the taxes. Through a series of calculations, he shows that money invested by the well-to-do throws off more wealth to society—what economists call the “consumer surplus,” or the value to consumers of the new products produced by investment—than the same amount of money when it has been taxed and redistributed. Even charity is bad for the economy, Mr. Conard says, because it diverts potential risk capital to less productive uses. 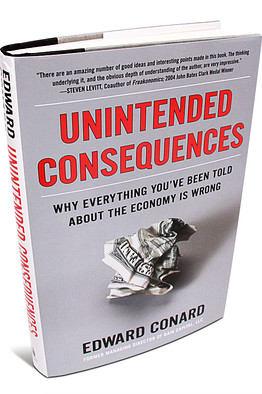 At the heart of “Unintended Consequences” is Mr. Conard’s contention that a successful economy requires outsize rewards for the able (and lucky) few who overcome very long odds to produce valuable innovations that others are willing to pay for. However rich these “lucky risk takers” get from starting Google or Apple, or Wal-Mart or FedEx—or for bringing innovation to tried-and-true goods and services—we as a society, Mr. Conard says, reap much more benefit from their inventions than the risk-takers themselves.

Innovations in agriculture, for example, have allowed the percentage of our income that we spend on food to decline to about 10% today from 24% in 1950. In that time, producers’ profits have remained steady at about 10% of revenues. If you do the math, which Mr. Conard himself does in a footnote, you find that the split of value, over time, favors consumers by a ratio of 20-to-1. A similar split, he argues, can be detected almost anywhere one looks in our economy.

Far from mercilessly exploiting hoi polloi, even the risk takers who do spectacularly well—and Mr. Conard emphasizes that failure is “almost certain” when entering into this Darwinian competition—end up, in effect, giving away most of the value they have created. What is more, the competitive advantage that comes from innovation is fleeting. Consider MySpace, if you can remember it at all.

But consumers benefit from invention no matter which competitor comes out on top, and the benefits we enjoy long outlast the profits reaped by the original inventors. Thus we should do everything we can to motivate people to put their capital at risk on behalf of new ventures, including lowering their tax rates. Mr. Conard does not like the vogue idea of taxing consumption rather than investment. Increased consumption, he says, “is the return for investment.”

Rewarding success with both wealth and status, according to Mr. Conard, is how America succeeded in the first place, and it is the only way to return to strong growth and full employment. As he puts it: “High payoffs for lucky innovators motivate others to duplicate their success and avoid loss of status from failing to do so. Rather than lamenting the disparity of U.S. wages, we should cherish our good fortune.” More equal societies work less, invest less, grow more slowly and ultimately leave everyone less well-off. In recent years, the U.S. “ran the table on Internet innovations, creating companies like Google, Facebook, Microsoft, Intel, Apple, Cisco, Twitter, Amazon, eBay, YouTube and others,” while “Europe and Japan,” with higher marginal tax rates, lower work-force participation and fewer hours worked per employee, “scarcely contributed.”

It is refreshing, at a time when so many take the failure of capitalism for granted, to read a bravado defense of the greatest force for wealth creation that the world has ever known.